Toxicology, is a slow acting less potent poison, which does not kill the person immediately, but gets manifested in the form of many diseases. Skin diseases (Kustha) are one among the main symptoms of Dooshivisha. Vicharchika, is one among Kshudra kustha, which is highly prevalent, common and distressing condition. Recurrence and chronicity are the main threat faced by patients suffering from Vicharchika. Most of the features of Vicharchika show similarity with symptoms of the disease entity, eczema of modern dermatology. In India, the point prevalence of dermatological cases are 9.25%, and that of eczema is 6.75%. Arkatailam is the formulation prescribed in Yogaratnakaram, which reflects the therapeutic effect of toxic plant Arka, which is directly indicated for Vicharchika. The aims and objective of the study is to evaluate the combined effect of Arkataila and Patoladi gana kashaya in Dooshivishajanya Vicharchika. The study design was an interventional pre-post study with sample size 30. Patients with signs and symptoms of Vicharchika, having history of Dooshivisha, of age group between 20-60 satisfying the diagnostic criteria selected from the OPD of Government Ayurveda College Panchakarma, Hospital, Poojappura, Thiruvananthapuram, were included in the study. The study group was given Avipathychoorna internally on first day for Virechana. On 2nd day onwards Patoladi gana Kashaya was given internally and Arkataila externally for 14 days. Symptomatic assessments were done before treatment, on 8th day, after the treatment and after the follow up period of 7 days. Results were analyzed statistically. The results show that the effect of Arkataila and Patoladiganakashaya is very effective in Dooshivishajanya vicharchika. 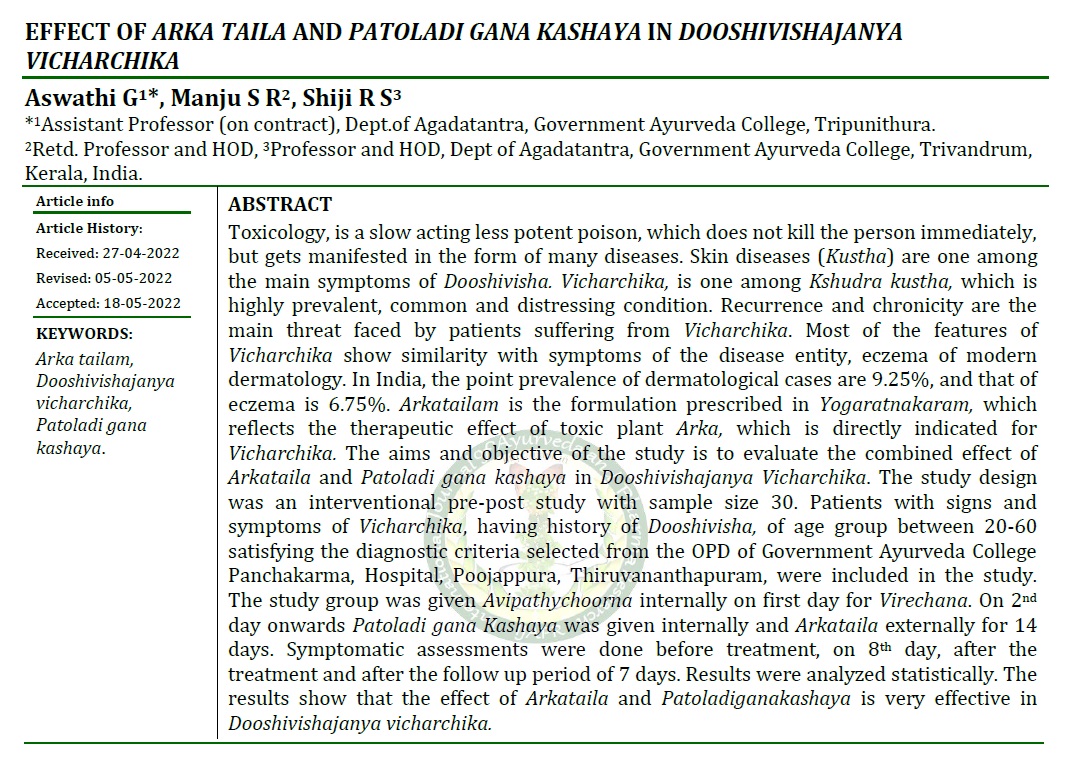