There are standard descriptions on the relationship between Doshas and Rasa in Ayurveda textbooks. Particular Rasas increase/decrease respective Doshas, so that Rasas become causes of diseases through excess usage. In the other side they classify Doshas having opposite characters. Even when the standard Rasa dosha relationship prevails, in practice it is often observed that such relations are surmounted. Here is an effort to explore such phenomenon. Methodology: 1. Survey was conducted among practitioners with a structured semi validated questionnaire to collect ideas regarding most repeated Dosha in diseases reported at general clinics and to enlist most frequently used Kashaya yogas in general practice. 2. Findings were tabulated. 3. Most frequently used Kashaya yogas were analysed for Rasas of their ingredients and rasa profiles of the formulations were prepared. Results: From the survey it was found that most repeated Doshas among diseases is Vata. Among the most frequently used Kashayas majority belong to Vatahara group. But from the Rasa profiles prepared it was found that most of the ingredients belong to Tikta-kashaya rasa. This finding is contradicted with the conventional Rasa- dosha relationship. Because Tikta-kashaya rasas usually increase Vata. Conclusion: Even though Rasa dosha relationship is vital in Ayurveda, in practice some of the rules are violated. 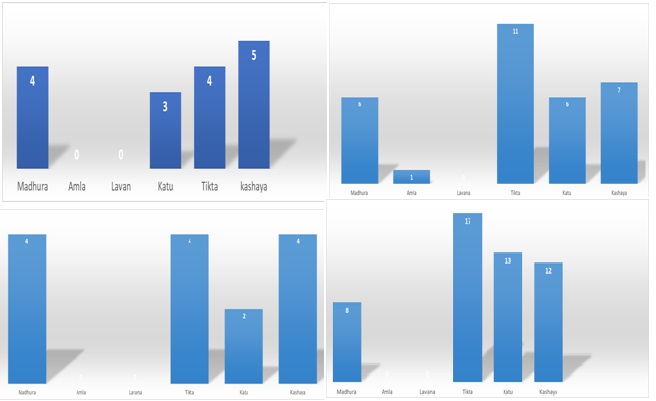