Ayurveda promises, a disease free, happy and long life. Among the eight branches of Ayurveda, each branch consists of enormous knowledge from basic concepts up to critical health care strategies. Shalya tantra a prime branch in Astanga Ayurveda is the rich in many aspects of modern surgical concepts. This branch has immense potential to belt the solution of many challenging and unresolved complicated surgical ailments. Acharya Sushruta the pioneer in the field of surgery described four principles therapeutic types in the management of Arshas i.e., Bheshaja, Kshara karma, Agni Karma and Shastra Karma.  Ayurvedic approach especially Kshara Karma stood for better than modern therapeutic option in terms of safety, easy, low cost, devoid of post operative complications and can be done as OPD procedure with minimal set up. Nimba pratisaraneeya kshara has been mentioned throughout the classical literature for Arsha, described as an Upakrama and is substitute for surgical procedure. Nimba pratisaraneeya teekshna kshara which is having antibacterial, antiviral and antifungal properties and is specially told by Acharya Sushruta. It can be successfully used in the management of Ardra Arshas without any post operative complications. Pratisaraneeya kshara is external application of Kshara whereas internal use of Kshara is known as Paniya kshara. Acharya Dalhana the commentator of Sushruta explained that the substance which produces Shodhana of bodily Dosha, Dhatu, Maladi because of its Ksharana action is called Kshara. It is known as Kshara (alkali) also because of its corrosive nature (Ksharana) Kshara is having benefits like Chedana, Bhedana, Lekhana, Shodhana and Ropana properties with early hemostasis and total eradication of infection, so that it reduces recurrence, helps for the wound healing and also  the duration of treatment is less. Though many researchers have been carried on Nimba till date, this review is done to highlight the significance of Kshara property in Nimba along with its therapeutic use 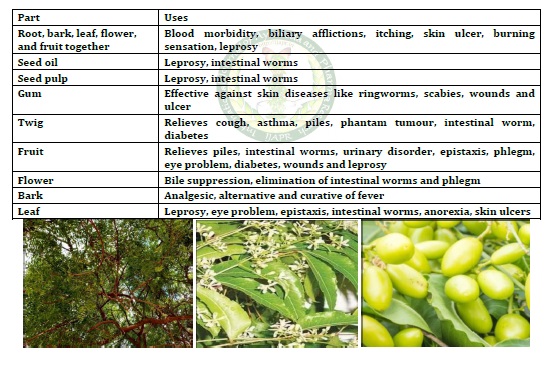