Ayurvedic Approach in the Management of Deep Vein Thrombosis (DVT): A Case Study

Venous Thrombosis (VT) of deep vein is a life-threatening condition. Deep vein thrombosis also known as Phlebothrombosis is a semisolid clot in vein which has got high tendency to develop pulmonary embolism and sudden death. It has an incidence of 1 per 1000 annually in adult population and is the third most common vascular disease, after Ischemic heart disease (IHD). DVT occurs most commonly in the lower extremities. The superficial femoral and popliteal veins in the thighs and the posterior tibial and peroneal veins in the calves are most commonly affected. Conventional treatment for DVT has some reported limitations and often requires expensive hospitalization. The present case study deals with a 49-year-old male, with a known history of heart attack 3 months before and lies in hospital bed for several days without sufficiently moving his legs, who noticed weakness, pain and swelling of bilateral lower limbs after discharge from hospital. In Doppler sonography it was found to have thrombosis of anterior and posterior tibial veins of right and left lower limbs. In Ayurveda the disease is not mentioned as it is but it can be correlated to Gambhira-vatarakta, Siragata-vata etc. This case study is about management of DVT with multi-modality treatment in the form of Panchakarma procedures such as Rooksha sweda, Rooksha vasti, Upanaha, Jaloukavacharana, Kashaya dhara, Kashaya vasti, Ksheeravasti along with oral medications. Treatment shown remarkable result especially in reducing swelling, pain and weakness. Assessment was done on the basis of signs and symptoms and doppler sonography. Venous doppler study showed normal superficial and deep venous system on both sides. 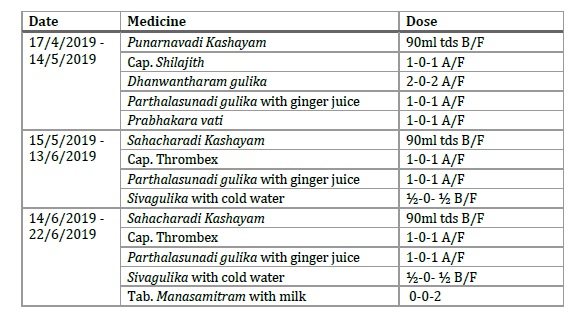