Ayurveda is a science of life and it is considered as one of the oldest system of medicine having holistic approach. Protection of health and cure of disease are the main two objectives of Ayurveda. Dosha, Dhatu and Malas are the root system of our body, thus, Dravya have been described in classical Ayurved texts according to Guna-Karma Siddhant.

The rational use of drug is mentioned in Ayurved, Physician should have his therapeutic plan after examining patient by Dashvidha Pariksha.

Charak Samhita is one of the Classical Text of Ayurveda from Bruhat-trayis written by Maharhi Agnivesh in 1000 BC re-edited by Acharya Charak, in 500 BC and completed by Dridhabala in 400 cent. AD. Acharya Charaka had described the Dravyas as per similar and peculiar pharmacological actions into 50 Mahakashayas based on Guna-karma Siddhant and Shrung Grahi Nyaya (Maxim). Mahakashay concept in Charaka Samhita is unique and peculiar. Its a ready recknover or practical prescriber for Ayurveda physicians, it is more concerned with rational use of drug in particular diseased condition. After describing Mahakashayas, Charakacharya described its utility. Mahakashay is unique concept in Charaka Samhita. During this Covid19 Pandaemic situation Mahakashayas were very useful for prevention and treatment of Covid 19, such as Jwarahar, Kasahar, Shwashar, Krumighna, Balya and Vayasthapan Mahakashays. These Mahakashays should be studied in Semantic way, means we should study the suffix words specially in Mahakashaya, that will help to draw some inferences and by pragmatic study of these Mahakashaya we can be able to understand the meaning behind context and concept- Such as knowing more facts about sequence of adding Dravyas in Mahakashayas. So if these Mahakashayas studied, with semantinic and pragmatic view, more inferences can be drawn and it will be beneficial for researchers, students, teachers and practitioners in future. Hence semantic and pragmatic study of Charakokta Mahakashaya is very much necessary. 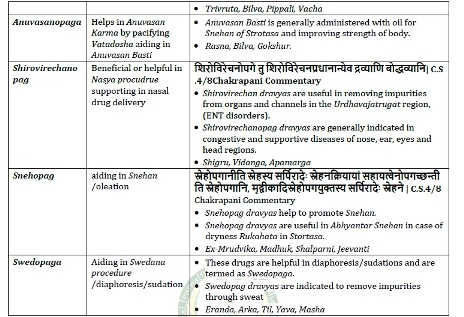